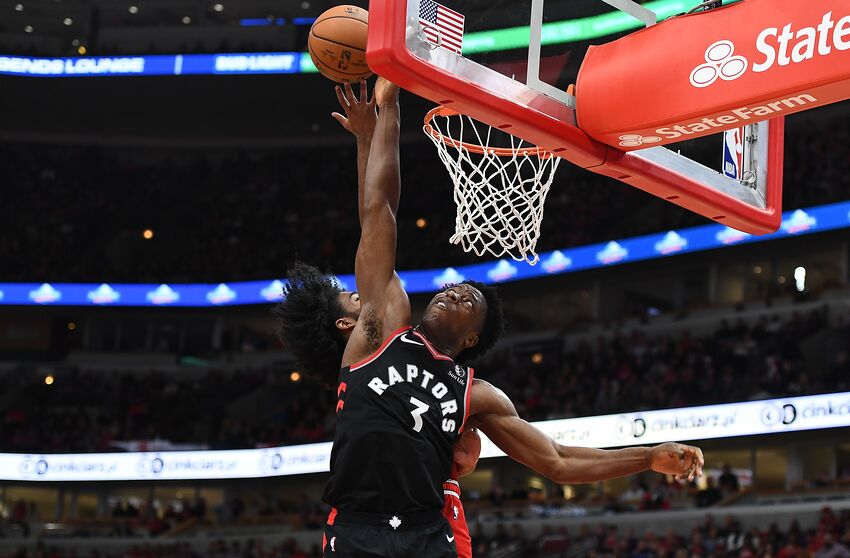 It is a busy Monday in the NBA with 9 games on the docket. If you are playing the odds, the Toronto Raptors as 4½-road favorites could be a solid play.

The Toronto Raptors have lost their last three games, but it’s not like they were losing to teams from the rear — or even the middle — of the pack. The Raptors lost in overtime to Miami, to Houston and again Sunday at Philadelphia, teams that are a combined 49-20 on the young season.

Toronto visits the Chicago Bulls on Monday night, a team that has been wildly inconsistent all season and has also lost two straight. You can forgive an overtime loss Sunday at Miami (17-6), but that home loss to the Warriors (5-19) on Friday is going to sting for awhile.

Both teams are in SEGABABA situations, with the Raptors in a road-road scenario and the Bulls playing a home-road combination on consecutive nights. So there won’t be any clear rest advantage.

If it’s going to come down to what’s on the floor, Toronto is 5-2 against the spread in their last seven games against Chicago and have won 10 straight against the Bulls straight up. That includes a 108-84 beatdown as three-point road favorites on Oct. 26, also at Chicago’s United Center.

The Raptors are just 2-4 ATS in their last six road games, while the Bulls have covered in four of their last five overall. Even with Fred VanVleet leaving Sunday’s game at Philadelphia with a knee contusion, Toronto has too much depth and too much experience — the Raptors simply don’t lose to bad teams. They are 9-0 SU this season against teams that are currently below .500.

Laying the 4½ and rolling with the Raptors is the play.

Toronto Raptors (minus 4½) at Chicago Bulls

Here’s a look at the rest of Monday’s NBA schedule:\n

LA Clippers (minus 2) at Indiana Pacers

Notable: This line is in flux because the LA Clippers are on a road-road SEGABABA and Kawhi Leonard hasn’t played both ends of a back-to-back since April 2017. Since Leonard played 32 minutes Sunday night at Washington, he is not likely to play Monday when the Clips visit the Indiana Pacers.

Cleveland Cavaliers at Boston Celtics (minus 13½)

Notable: The Cleveland Cavaliers finish up a two-game Atlantic Division road trip after being demolished Saturday in Philadelphia, 141-94. It was Cleveland’s worst loss in almost nine years (a 55-point loss at the Lakers on Jan. 11, 2011) and the fifth-worst in franchise history. The Cavs are 1-5 ATS over their last six games, all losses SU.

The last time these two teams played was in Cleveland on Nov. 5, with the Boston Celtics getting a 119-113 win and a push at six-point favorites. The Celtics are 4-1 ATS over their last five games and have won nine straight games at TD Garden straight up. In their last 10 games, Cleveland is 2-8 ATS (0-4 on the road), while Boston is 7-3, including 3-1 at home.

Sacramento Kings at Houston Rockets (minus 12) Notable: The Sacramento Kings are on a SEGABABA, wrapping up a four-game road trip after holding off the Mavericks down the stretch Sunday at Dallas. The Houston Rockets have won four of their last five overall, but go against a Kings team that is 14-3 ATS over its last 17 games and has gone 5-2 ATS on the road of late.

But the Rockets have been good bets as well, going 11-5 ATS over their last 16 games. Houston has beaten the Kings 10 straight times at Toyota Center, with Sacramento’s last win occurring on New Year’s Eve in 2013. The Rockets are 6-4 ATS in their last 10 games, with a 3-2 ATS mark at home.

Orlando Magic at Milwaukee Bucks (minus 12)

Notable: The Orlando Magic come into this one with four straight wins. But they will catch a Milwaukee Bucks club that has won 14 in a row, including their last four by an average of 34.3 points (that is not a typo). Orlando’s winning streak has been against the Warriors, Wizards, Suns and Cavaliers — this is a major step up in weight class.

Milwaukee pummeled the Magic 123-91 as 4½-point road favorites on Nov. 1. Orlando is 4-2 ATS over its last six games and 4-1 ATS in their last five on the road. The Bucks are 4-1 ATS over their last five games and the way they have been demolishing teams of late means their star is well-rested — Giannis Antetokounmpo has averaged just 24 minutes per game in the last four games.

Markieff Morris has been dealing with a neck issue for the Pistons, but was not on the injury report Sunday night, a good sign for his availability. But Detroit has only covered in four of its last 14 games against New Orleans, losing 12 of 14 straight up. The Pistons — much like many of us — struggle on Mondays as well, going 2-6 ATS in their last eight Monday games.

Minnesota Timberwolves at Phoenix Suns (minus 4)

Notable: The Minnesota Timberwolves have lost four in a row and come in on a road-road SEGABABA after getting smacked around 142-125 by the Lakers on Sunday night. That game after allowing 139 points in an overtime loss at Oklahoma City on Friday, so defense has not really been Minnesota’s thing of late.

Notable: These teams are polar opposites as the Oklahoma City Thunder are below .500 overall but are covering at a 64 percent clip, while the Utah Jazz are above .500 overall, but only cover at a 39 percent rate. The Thunder are 4-1 ATS over their last five, including Sunday’s 109-96 win at Portland. Utah is just 2-4 ATS over its last six, but did get the cover against the Grizzlies Saturday.

As is the fashion for these teams, the Jazz won the first meeting at Salt Lake City on Oct. 23 100-95, but Oklahoma City covered as a nine-point underdog. The Thunder are 6-1 ATS in their last seven matchups with Utah and are 8-3 ATS over their last 11 games overall.

Next: Each NBA team's greatest coach ever

When these teams met on Nov. 19 in Memphis, it was Golden State that came away with a 114-95 victory, getting the win straight up as 6½-point underdogs. The Grizzlies will likely get rookie point guard Ja Morant back on Monday night; he was upgraded to probable on the injury report after missing Memphis’ last four games.